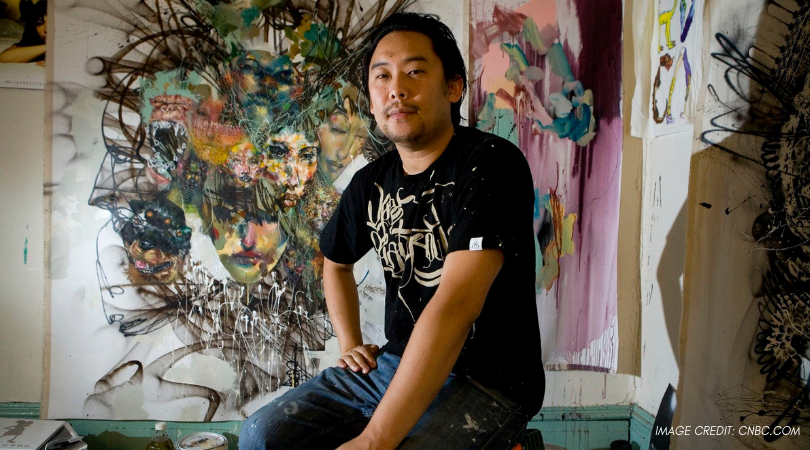 Facebook Graffiti artist who made $200 million overnight, it is none other than American Street Artist David Choe.

David Choe is an American street artist, figure painter, muralist, graffiti artist and graphic novelist of Korean descent very well known for his figure paintings. In the graffiti world, he is known as the bucktoothed whale. 43 year old, has been spray-painting on the streets since he was in his teens. Also, he had hosted DVDASA, a lifestyle, relationship and entertainment podcast with co-host Asa Akira.

David is widely recognized for his watercolour works which were exhibited in his solo show at the Museo Universitario Del Chopo, Mexico City in 2013. There was a time when the painter used to call Facebook a “ridiculous” idea. According to “The Filthy Rich Guide,” he agreed to paint the building for a hefty sum: $60,000.

But Parker offered him a choice between cash and company stock, initially, David found it a risky decision but still chose a stock. In 2012, when Facebook went public at $38 a share, his stock options were worth $200 million, making him a multimillionaire overnight.

What should I draw ? Drawing from ? or ❤️ lazy Sundays business casual drawing session please join me- thanks to everyone who played #choeshow or just watched from the sidelines I love you all! there’s currently a #choeshow contest going and more to come so stay tuned #contests #prizes #giveaways

Earlier this year, Choe debuted an invite-only exhibit in Los Angeles, “The Choe Show.” Choe and his work have also been the subject of controversy because of his painting figures which depict desire, degradation, and exaltation, and are characterized by a raw, frenetic tone that he has termed “dirty style.”