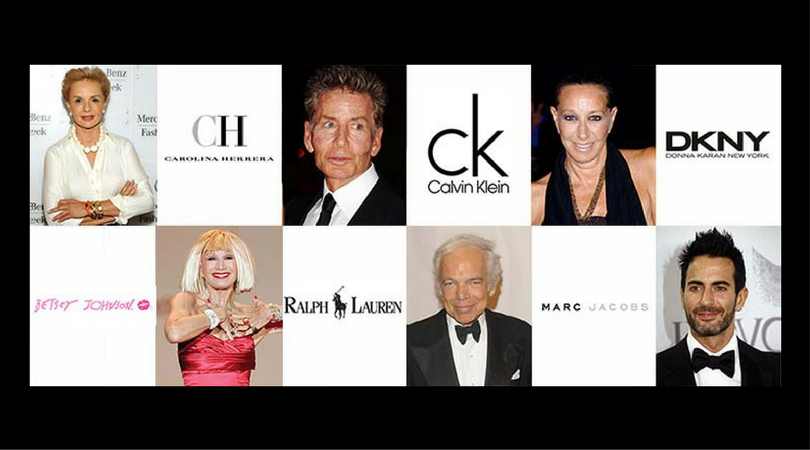 Designers are those who don’t only design clothes as they also design dreams. These are the world top 10 designers whose personal brand made them the best designers in the world:

Valentino Garavani –He’s known as the founder of Valentino Spa. He’s an incredible living legend and an Italian designer who is known for designing clothes for famous stars in the world. Some of his customers are Elizabeth Taylor, Jacqueline Kennedy, Queen Paola of Belgium, and Princess Margaret.

Giorgio Armani – He is renowned for being the designer who changed the trend in the industry of fashion after making the brand “Armani” in year 1975. Armani is also considered as the first designer to ban models with BMI under 18.

Calvin Klein – Calvin Klein or CK is popular among other brands. In year 1968, Calvin Klein founded the brand and started his career through opening stores of the coat of men and women in New York City. Since then, he expanded his business and had been ruling the industry.

Donatella Versace – He’s the chief designer and vice president of Versace Group. Donatella is the first fashion designer to use the A-list celebrities in promoting her designs on the catwalk instead of going for the nameless models.

Coco Chanel – She’s absolutely a leading figure in the industry of fashion. She’s a French designer and famous for her brand Chanel.

Ralph Lauren – He is a fantastic fashion designer that the world has ever seen. He’s widely renowned for his incomparable designing and when it comes to his personal brand, he already introduced Polo Ralph Lauren. In year 1972, he had gained his reputation when he launched the world-renowned short sleeve shirt with a Polo logo on it. He’s absolutely one of the designers in the world.

Tom Ford – He is widely popular for overhauling Gucci during the bad days. He is the founder of the brand called Tom Ford, which dominated the market of menswear and accessory.

Marc Jacobs – He belongs to the Jewish family and known as the designer of a famous brand Marc by Marc Jacobs, Marc Jacobs and Diffusion Line. While he’s studying at Parson College of Design, Jacobs sold out his stack of knit sweaters and became the first of the celebrities in no time. Back in 2010, he was mentioned in the list of the most influential people across the globe by the Time Magazine.

Michael Kors- Micheal Kors is popularly known as one of the best American designers in the world of luxury accessories and sportswear.

Pierre Cardin – He is an Italian-born Frenchman who is popular for his pieces in the 20th century that looked as though they’re from the 25th century. As Pierre Cardin rose to fame during the space race, his creations became famous due to their futuristic styles. His bubble dresses had all the fixings of the science fiction, which combines the earthly elegance with the exceptional colours as well as avant grade design.

What is Personal Branding

Harley Davidson Is One of the World’s Most Engaging Brand